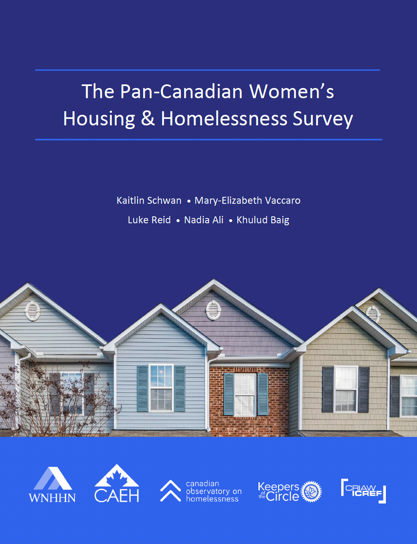 Today is the release of The Pan-Canadian Women’s Housing and Homelessness Survey, which illuminates the understudied experiences facing women, girls, and gender diverse people living in extreme poverty. It includes recommendations for the next federal government in an effort to prevent and eliminate housing insecurity and homelessness for this marginalized group.

The survey is the result of a joint effort by the Women’s National Housing and Homelessness Network (WNHHN), Canadian Alliance to End Homelessness, Canadian Observatory on Homelessness, Keepers of the Circle, and the Canadian Research Institute for the Advancement of Women. The authors, Kaitlin Schwan, Mary-Elizabeth Vaccaro, Luke Reid, Nadia Ali and Khulud Baig brought together over 500 unique voices, experiences, and ideas of policy change from women, girls and gender diverse peoples across Canada—making this the largest gender-specific dataset on homelessness in Canada to date.

The analysis presents 10 key findings, including 79% of respondents experiencing housing need or homelessness report having a disability, 75% identify as a survivor of trauma or abuse, and respondents reported significant barriers to accessing emergency services, with almost a third being unable to access a bed when they needed one, among many others.

“During the recent election, federal leaders debated Canada’s human rights record, and the experiences shared in this survey cast a grim shadow on that record,” says Kaitlin Schwan, one of the report’s authors and co-chair of the WNHHN.  “Our findings show a severe lack of adequate housing, shelters, and services for women and gender diverse people in this country, with gender-based discrimination and inequity leaving these groups on the street.”

In the wake of the housing and homelessness crisis facing women and gender diverse people across Canada, the WNHHN conducted an exhaustive scoping literature review on the causes and conditions of homelessness for women, The State of Women’s Housing Need & Homelessness in Canada (2020). Building on this scholarship, the WNHHN sought to create a national statistical portrait of these issues through the first-ever pan-Canadian survey on women’s homelessness and housing need in Canada.

“This survey echoes much of what we’re hearing on the ground,” said Khulud Baig, Keepers of the Circle and one of the report’s authors. “These stories tell us the real-world consequences of discrimination, inequity and a lack of accessible housing and social funding.

“The recently elected federal MPs must prioritize and work to fix this critical issue.”

On the basis of the key findings, the authors offer a number of recommendations for federal, provincial/territorial, and municipal governments—which is critical for advancing housing equity, actualizing the right to housing in Canada, and preventing and eliminating housing insecurity and homelessness for women, girls and gender diverse peoples.