The complexities facing mothers who find themselves homeless are many and interconnected, not least the very real fear of having their children apprehended. For Indigenous women it’s even worse – Indigenous children are apprehended at an unconscionable rate. Often these mums draw on a patchwork of agencies and community supports but no one takes responsibility to connect the dots and guide them through the maze. Wendy’s story illustrates missed opportunities for prevention of homelessness and child apprehension when women and their children fall through the cracks. 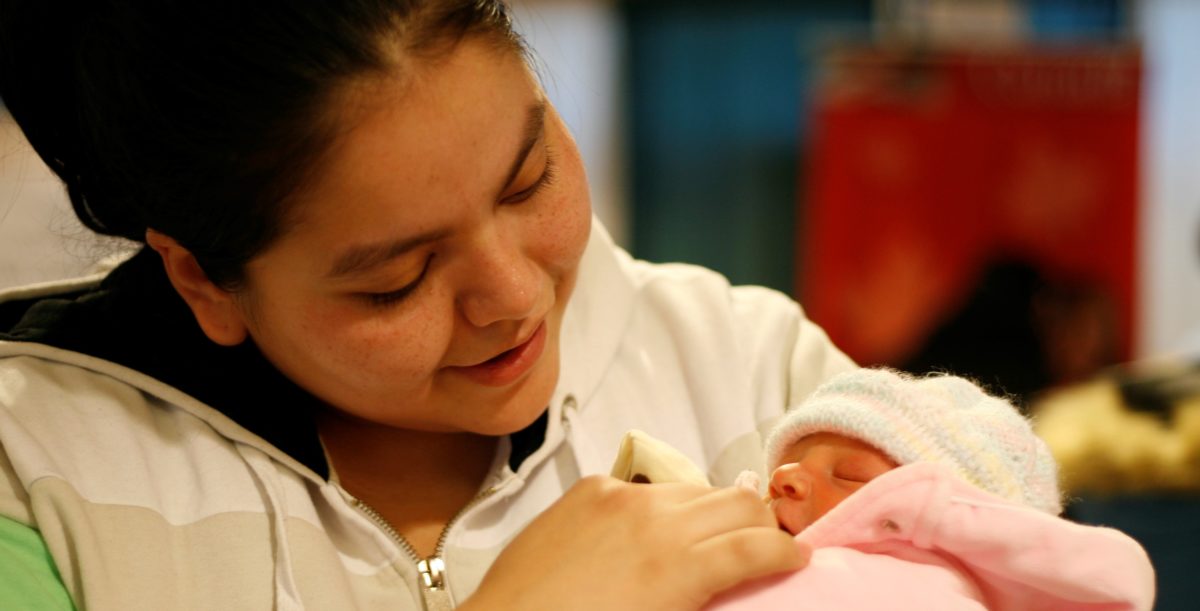 In our first guest blog, Susan Scott tells Wendy’s story of homelessness, child apprehension and missed opportunities. Names have been changed and certain details omitted to protect the individuals involved.

I am in deep mourning for my friend Wendy. It’s not that she’s dead, but she might as well be as far as Canadians are concerned, and she might well prefer to be dead the way we have treated her. I think of her beautiful smile, the heroic way she held her family together against all odds, her generosity on those few occasions when she had anything to share and, even more precious, those things that money cannot give – friendship at the deepest level, honorary kinship, and the jokes and confidences between girlfriends.

Wendy was born with few advantages. She’s desperately poor, she’s not blessed with good looks, although when she smiles the room lights up, her education was probably cut short and she has a disability that sometimes makes it difficult for her to cope. Like so many other Indigenous women she did not know the comfort and intimacy of a close family because she was apprehended at an early age; she only met her sisters when they were all adults. And, yet, miraculously without a parental example, she created a loving family for her three children and she did it on a threadlike shoe-string of a budget.

The two older children are bright and bouncy and were thriving at school. When I went to their home, they would hurl themselves at the entrance yelling, “It’s Grammie.” We spent many happy hours reading, one child on each knee. Another friend had given me a bunch of books because there was precious little in Wendy’s budget for reading materials. We used them well. There is nothing like reading aloud to a child snugged right up to you. At meals, they both insisted on sitting on my lap, talking between mouthfuls, recounting what they were doing at school, what they wanted for their birthdays and telling me about the baby in the family.

When Wendy realized she was expecting a third child, she thought that with her disability and lack of income she might not be able to provide the best care for it, so she made a very hard but altruistic decision. She found a couple who wanted to adopt a newborn. Everything was in place; Wendy figured her baby would be in good hands and the couple was happy to welcome an infant into their lives.

That baby, whom we will call Ryan, is about three months younger than my birth grandson. Like James he was born with some health issues. James, thanks to modern medicine, has overcome his. Ryan’s, though, are not treatable. He will always have a major disability. When Wendy phoned the couple to break the news, they said they did not want a damaged baby.

Wendy did not hesitate. She decided that she couldn’t trust anyone to love “a little native boy” with serious disabilities the way she could and would. Ryan was embraced by his mom and siblings. The only problem was that they didn’t have anything for him – not a single diaper, or receiving blanket, no sleepers. Nothing.

James was already pushing his way out of his first-size outfits and had been blessed with an over-abundance of clothing and toys. We packed them up and took them round to their basement suite where, for the first time, I had the joy of holding Ryan. He may have health problems, but he’s a very sweet happy boy much beloved by everyone who encounters him. Although they have not met, the little boys cemented our two families together.

Against all odds, Wendy kept it all together though never quite making ends meet on her monthly AISH (Assured Income for the Severely Handicapped) cheque, but valiantly doing her best and providing unfailing love and encouragement to her children. As a friend I didn’t want to pry, but there didn’t seem to be much in the way of support or extra services for any of them, but particularly not for Ryan.

It’s a struggle taking little children to appointments at the best of times, but riding the bus with three little ones when the snow is flying and pushing a stroller with wonky wheels is certainly not my idea of fun. And, because most cheaper rental places tend to be further out, it makes the trek to special clinics and the Alberta Children’s Hospital that much more difficult.

Wendy and the children didn’t always make their appointments, but she did her best. The two older ones started school where they thrived, but that only complicated the logistics because they were coming and going at different times. However, Wendy made their attendance a priority and did her utmost to give Ryan the care he needed.

This winter the family lost their home.

Presumably, the conflicting demands of rent, food and all the other necessities of life were just too much, and AISH too little.

Wendy and the children moved to a shelter which provided breakfast, dinner and packed lunches, but turfed families out early in the morning. During the day, to keep the little ones warm and to give the older two continuity, Wendy used her AISH money to rent a cheap hotel room near the school. She says no one helped her find a better solution and any money she might have saved for a damage deposit was quickly lining the hotel’s coffers. In the evenings they returned to the shelter which gave them an evening meal, breakfast and some sandwiches for the daytime.

A few weeks ago, the system pounced on Wendy and scooped the children up. They were sent to two foster homes – the older kids to one and baby Ryan to another. Ironically and sadly, this was around the time Alberta Premier Rachel Notley was delivering an apology for the Sixties Scoop, but even more ironically, the scoop of Wendy’s children was orchestrated by an Indigenous child welfare system.

It’s one thing to talk in theory about apprehending children. It’s another thing to experience it. It’s gut-wrenching. I wonder what it’s like for little Ryan, now three, away from all his close family. What is he thinking? What are the older two up to? Does someone still read to them?

As it would be for any mom, it’s devastating for Wendy. I see her fading fast, giving up on herself, even though she’s determined to fight for her kids. Like many Indigenous women across Canada, Wendy has very few resources to make claim to her children: she has no money, no knowledge of the system, which from her viewpoint, makes up arbitrary rules as it goes along. And, without a home and a wardrobe of respectable clothes, how is she to even look like a worthy parent when she goes to court?

As for me, I’m furious at a system that would not give Wendy and so many other Indigenous parents the minimal supports they require and instead rips the children out of their arms and I’m grieving the loss of three lovely grandchildren and a loyal friend. As Nikki, another woman who had also been raised in foster care and who had had her children snatched away, put it so eloquently:

“When you lose a child to the ministry, it feels as though it is dead and gone. . . .It’s like they are dead, so you do what you can do to make the pain go away. They swoop down like vultures and leave you there, by yourself in agony. It feels like someone has taken a knife and is jabbing you and you can’t breathe, and you want to die, so you find ways to do it.”

Premier Notley has said sorry for the Sixties Baby Scoop; that’s the easy part of apologizing. The harder part is to prevent institutional cradle-snatching. Clearly it still continues and the cost is great. Cindy Blackstock the great advocate for Indigenous children says we are removing them at a greater rate than during the Sixties Scoop. And terrible though what is happening to immigrant children in the U.S., Canadians should not be so swift to judge when it’s happening here one or two babies at a time.

There are the intergenerational emotional costs that wrack Wendy, Nikki and their children, and in the end we all pay.  It’s crass to talk about saving money when facing such pain, but sometimes that’s the only argument that works.

It costs a lot to put children into care. For a start their foster parents are often paid more by provincial governments than their natural parents, but we are also building up a future financial drain because it has been shown that impoverished children – monetarily and emotionally – do worse at school, are more likely to use drugs, suffer more health problems and are more likely to be involved with the law and themselves end up homeless.

It’s time to stop paying lip service to doing our “best for the child,” and to put meaningful supports into place for Wendy, Ryan, his siblings and all the other vulnerable mothers and children. Currently Wendy feels deeply ashamed because her children have been taken away, but it’s the rest of us who should be hanging our heads.

Susan Scott is the author of All Our Sisters, Stories of Homeless Women in Canada, a book that prompted the first two national conferences on women and housing.

Become a guest blogger! The CAEH is looking for compelling and interesting blogs to call attention to important issues, address burning questions and share concrete solutions to homelessness. Blogs should be 500 to 750 words, tell a story like a journalist, provide links for more information and can include graphics and photos. To submit a blog contact tim@caeh.ca.

PREV
The Lowdown on Common Assessment Tools
NEXT
Join the call for a legislated right to housing in Canada!