A strong focus on prioritizing veterans and commitment to Coordinated Access is supporting this Built for Zero Canada community to sustain Functional Zero Veteran Homelessness. This blog is a part of our Bright Spot series highlighting outstanding work in ending homelessness happening across Canada. 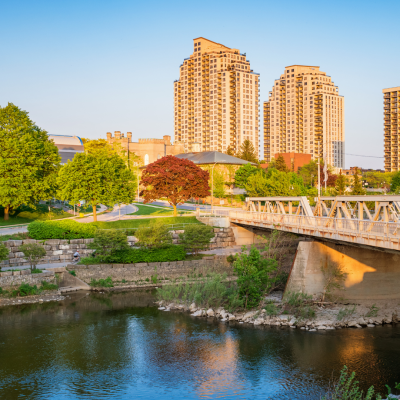 After making history as Canada’s first community to achieve functional zero veteran homelessness in October 2020—meaning that the number of veterans experiencing homelessness is less than or equal to the number of veterans a community has proven it can house in a month—London has worked hard to not only sustain this milestone but also make progress towards reaching absolute zero.

This Built for Zero Canada (BFZ-C) community laid the foundation of its work during the rise of the pandemic and transformed its system to better serve veterans experiencing homelessness.

“Veterans experiencing or at-risk of homelessness are a priority population in the City of London. When new affordable housing options are identified or created by the City, there are always units allotted to veterans. The Legion also makes efforts to frequently reach out to developers and landlords to bring new units online for veterans,” says Elle Lane, the City of London’s Coordinated Access Manager.

The City highlighted that its key to success was prioritizing veterans, which included the creation of a Veteran’s Experiencing Homelessness Advisory Group—a coordinated and integrated community response to Veteran’s homelessness—as well as funding London Cares, a Housing First program to specifically support Veteran intakes.

“This committee has been instrumental in helping to meet our initial functional zero goal and continues to be a place to help resolve issues. VEHAC helps guide processes, review gaps in the system and provides resources for the working group,” says Lane.

As they made their way through the city’s By-Name List, this collaboration on the Advisory Committee and working group between the homeless response sector and veteran services—including shelters, Housing First programs, the Royal Canadian Legion, and Veteran Affairs Canada services and supports – was pivotal to their success in housing and supporting each veteran.

The strategy behind sustaining

Lane explains, “until April 2022, we saw a small and steady inflow of between 1-3 veterans experiencing homelessness each month and we were able to keep pace with moving them into housing. But come April, we had an inflow of six new individuals which bumped our numbers to nine”.

Lane notes the increased inflow of veterans was especially challenging, “because at the same time, we were facing a lack of bridge housing space in motels due to an overall lack of vacancies. We knew we had to pivot,”.

“Instances of increasing above the functional zero threshold from time to time are not unexpected and are considered part of the learning process. Homelessness is a dynamic and constantly changing problem. What it took to reach the initial functional zero milestone is not necessarily what it takes to sustain. Communities need to constantly monitor their data in real-time and adjust their approach to respond to ever-changing conditions,” says Marie Morrison, BFZ-C Director at the Canadian Alliance to End Homelessness.

In response to the increase in veteran homelessness, the community increased the frequency of their working group meetings to determine who is at risk of homelessness and complete prevention interventions. They also increased capacity in their London Cares Housing First program and repurposed existing emergency spaces to housing units. Lane notes. “Leaning on our homeless response sector, especially to support transitional units, helped get us to where we are and that is something we aim to continue doing.”

Lane highlights their gratitude to partners in helping to respond to the increase in veteran homelessness, reshape processes, and give thoughtful guidance to support London’s return to their functional zero threshold.

Sustaining veteran functional zero has been a journey, but this Built for Zero community has pushed forward by implementing the necessary processes for long-term success. Now they continue the work to drive for absolute zero and expand their focus to other populations.

“We want to continue building on our learnings from the past few months to ensure that we are housing folks within 30 days, using a Housing First approach. Our first order of business is having them move into housing and next is providing them with the appropriate support.”

Success with functional zero is not a straight line. Canada is still in its early days of learning how to sustain these milestones and London has been a driving force in testing, learning, and leading the way.

Lane reflects, “sustaining takes continued work, but when the appropriate resources—partners, funding, and housing—are all at the table, matching veterans experiencing homelessness to housing solutions can be quick and efficient”. Lane shares that next steps include, “widening our focus with the guidance of our partners to reach absolute zero for veteran homelessness. But that’s not all, we know that what we learn from solving homelessness for veterans, can then be recreated for others, such as Indigenous and chronically homeless populations.”