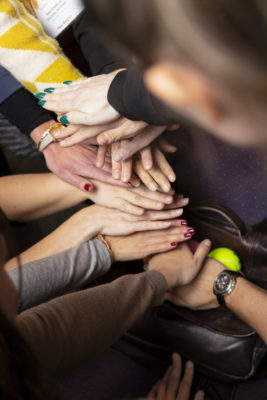 The City of Kawartha Lakes and County of Haliburton (Kawartha-Haliburton), a region of 90,200 in central Ontario, is breaking new ground on ending chronic homelessness thanks to an action focus and a “fail forward” mindset. They’ve not only achieved a 51% reduction in chronic homelessness in the last six months but they’re also transforming their system to respond more effectively in a crisis.

The real shift began when the two communities joined the 20,000 Homes Campaign in 2016 together. They started collecting quality real-time data on chronically homeless community members by name to understand their health and housing needs and made progress toward engaging and connecting key stakeholders.

“We wouldn’t be where we are without it,” says Michelle Corley, Program Supervisor, Housing Help Division, City of Kawartha Lakes, about joining the 20,000 Homes Campaign. “The resources and expertise we have available at our fingertips has been great. But also the peer support, the knowledge and experience sharing from other communities has been a huge support for us.”

“It’s exciting to have these numbers and move away from anecdotal evidence of housing move-ins,” says Jocelyn Blazey, Homelessness System Resource Coordinator, City of Kawartha Lakes.

Michelle and Jocelyn point to their Registry Week and By-Name List process as the tipping point behind the shift toward reducing chronic homelessness in Kawartha-Haliburton.

Collecting person-specific data is the key to ending homelessness for our most vulnerable (and often anonymous) homeless neighbours. A Registry Week is a coordinated outreach and triage assessment process to develop actionable data on every person experiencing homelessness. They are often the kick-off point for participation in the 20,000 Homes Campaign.

The goal of Registry Week is to identify people experiencing homelessness and gather information on their health and social needs. Following Registry Week, individuals are added to the By-Name List and prioritized for housing and support services.

“Registry Week is really significant for us getting partners engaged,” Jocelyn says. Kawartha-Haliburton participated in Registry Weeks in 2016 and 2018, which also helps raise awareness about the work being done in the community.

Michelle says when you’re left with a list of names it comes with “huge accountability.”

“You have an obligation to do something with it,” she adds. “When individuals get matched to appropriate housing and support, when you see folks who were homeless for a long time actually finding some stability—it’s awesome to see this progress.”

Some clients who had been chronically homeless in the community for years have now been housed for 1 to 1.5 years, according to Michelle and Jocelyn.

“It breaks down some myths and beliefs,” Michelle says. “In a small community, people just give up on some folks for whatever reason but to actually show that if we can follow the Housing First approach and prioritize individuals and match them to the appropriate supports and services, we’re able to completely change some people’s lives.”

What also sets Kawartha-Haliburton up for success is building enough flexibility into the system that allows them to respond and adjust to any situation. That’s thanks to working hard on integrating and connecting the system, which Michelle says is always a “work in progress.”

“We’re a small group of people,” Michelle says about the community of service providers in Kawartha-Haliburton. “We’re involved in so many different areas of work that we automatically see the affect one has on another. Homeless prevention funding stays within the municipality, which allows them to quickly adopt and change services as they see data changing along with it.

“We’re rapidly able to pivot and change according to the need in the community,” Michelle notes, which she also attributes to how closely they work with their housing corporation on housing the homeless.

“Although we’re a small community, we haven’t always been great at case conferencing and collaborating. Now that’s actually happening,” says Michelle. “Since we are working together, we are seeing some really creative ideas and approaches to removing an individual’s barriers to housing.”

A lot of this was made possible because of the “fail forward” mindset introduced to the team through the 20,000 Homes collaborative, Jocelyn says.

“We really tried to adopt the failing forward policy,” she adds. They work to adapt as much as possible to things. They know that numbers can fluctuate from one month to the next, that they can go from having a good month to seeing an influx the next if they discover, for instance, a motel filled with individuals experiencing homelessness.

“But being able to adapt to that and recognize we’re failing forward at this, it’s better than standing still,” Jocelyn says. “We do whatever we can to engage our community partners in the system.”

Kawartha-Haliburton has been a 20,000 Homes Campaign community since 2016.