The Built for Zero Canada community’s coordinated access system and real-time data transformed the way they look at homelessness. This blog is a part of our Bright Spot series highlighting outstanding work in ending homelessness happening across Canada. 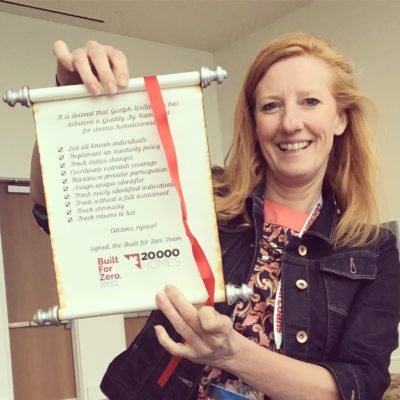 Guelph-Wellington is on a hot streak. The Built for Zero Canada community has measurably reduced chronic homelessness since September by 24% and has been working hard to ensure that their system is working for every individual.

Guelph-Wellington has reported 136 chronically homeless people in their community (as of March), which is a significant reduction from the 178 reported last September. The community housed 19 people in March alone and has moved in 485 since they first started reporting in February 2017.

“Joining Built for Zero Canada has enabled Guelph-Wellington to move forward as a community in a coordinated effort to address and eliminate homelessness,” says Lori Richer, Housing Stability Manager with the County of Wellington Social Services and her team lead. Guelph-Wellington was the third community in Canada to have a Quality By-Name List and the first mid-sized community to reach the below baseline milestone.

Lori says her community signed on to Built for Zero Canada (formerly the 20,000 Homes Campaign) in December 2015 and started out with their first registry week in April 2016. They had a Coordinated Access System in place by February 2017 and a Quality By-Name List in April 2018. “We feel our coordinated entry system transformed the way we look at homelessness in our community—it brings us together with our community partners.

“It shifted our focus toward ending homelessness.”

One of the initial surprises came out of Guelph-Wellington’s first registry week—the data showed them exactly where their system wasn’t working. For instance, the team didn’t anticipate the number of young people in their community who were experiencing homelessness. “We always had a youth shelter and data on the number of youth experiencing homelessness, but the data from registry week really highlighted how significant the numbers were,” Lori says.

About 30% of the youth in her community were experiencing homelessness at that time. It highlighted the need for a youth-specific Housing First worker and focusing efforts on an adult and youth By-Name List.

But lessons were also being learned from Guelph-Wellington’s Coordinated Access System. The community began to work collectively from one list to prioritize help to individuals who need it most. Before that, people were moved into housing largely based on “first come-first served”.

This shift in thinking and practice removed the subjectivity from the process once the community committed to its By-Name List and coordinated system, according to Leisha Burley, Program Director at Wyndham House. 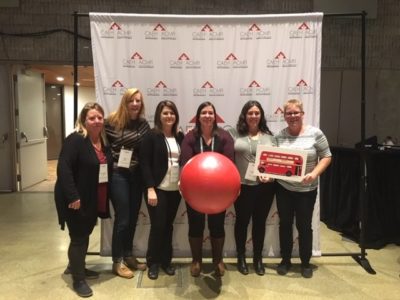 “I think people weren’t accustomed to waitlists or having to do a pre-assessment to determine the best fit and their eligibility,” says Leisha. But it was a necessary change that led to better results. It pushed her and her team to explore other types of housing with varying levels of support to better suit the needs of each individual. “Not everyone needs 24/7 support.”

And becoming a part of the Built for Zero Canada movement helped keep them on track, but also gave them space to celebrate progress too. It provided the guidelines and resources that helped them develop their Quality By-Name List, a critical component to their housing move-ins to date.

“It really drives us forward,” Lori says. “Our goals are public. We’re working with other areas and talking about some of our achievements. We’re all driving each other forward to meet this big goal.”

The team is able to call on Built for Zero Canada Improvement Advisors (who work one-on-one with communities to help them with resources, networking and providing guidance on practical solutions to homelessness), but they’re also connected to other communities across Canada who are working to solve homelessness too.

Early on in the campaign, Guelph-Wellington was introduced to community leaders and other contacts who helped them network with different levels of government officials, according to Dominica McPherson, Interim Coordinator of Guelph-Wellington Task Force for Poverty Elimination. But the momentum driven by housing people in the most need has kept them going.

“Getting to know individuals by name and having the data to demonstrate depth of the need in our community drove us forward,” Dominica says. “There was a new energy and momentum to move beyond managing homelessness to focusing on ending it.”

“Due to this work, key players are working together with a shared commitment to meet our goal because we know that ending homelessness is not only the right thing to do, it’s possible.”

Although it’s been a long process filled with plenty of learning since 2015, Guelph-Wellington is on track to continue its reductions and work quickly to solve issues even when they experience an uptick in their active chronic homeless numbers. Either way, they know they have a community behind them who believe in their work.

“I think we’re pretty excited about what we’ve achieved to date as a group,” Lori says. “The next steps for us is we really want to use the data to drive further system change.”

Guelph-Wellington is looking into new staffing positions and additional funding to help them get there. “We’re consistently looking at the data, how to consistently make improvements to drive the numbers down even further, and how to get people into a stable housing position,” she adds.

“We know that not one agency or one level of government alone can address such a complex issue but that together with a common goal and a coordinated community response, we can make significant impact.  We believe ending chronic homelessness is possible in our community and the Built for Zero Canada has provided us with continued inspiration to do so” says Ryan Pettipiere, Director of Housing, County of Wellington.