Exactly one year after the federal government’s announcement of a National Housing Strategy, and a few months away from the new homelessness strategy, Reaching Home, rolling out, this #National Housing Day sees us getting closer to realizing the right to housing. 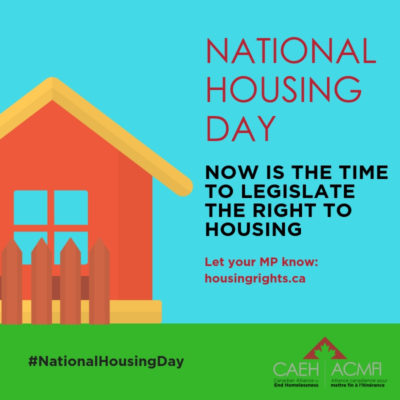 In 1998, Canadians and municipalities declared homelessness a national disaster. Two years later, November 22 was recognized as National Housing Day. And 17 years after that, Canada finally announced its first-ever National Housing Strategy on November 22, 2017.

Exactly one year later and we are at a pivotal moment in history as we make important progress on ending homelessness and guaranteeing the right to housing for all. For decades, advocates have been calling for a National Housing Strategy and federal leadership on homelessness. Today, National Housing Strategy investments are starting to arrive in our communities, a legislated federal commitment to the right to housing—something few would have dreamed possible even two years ago—is expected shortly, and the new federal homelessness strategy, Reaching Home, will launch in April.

We have been waiting a long time to reverse the policies and actions implemented over 30 years ago that led to Canada’s homelessness crisis today. And it looks like we’re beginning to roll back past mistakes by forging ahead with a rights-based strategy and investing in best practices and approaches to end homelessness for good.

Advocates like Leilani Farha, UN Special Rapporteur on the Right to Adequate Housing, tell us how everyone can bring meaningful change through their own personal choices and actions.

Check out our one-on-one interview with the internationally renowned expert on housing rights.

Beginning the end of homelessness

As our president & CEO Tim Richter recently said, “For decades, homelessness in Canada has followed a lethal trajectory, increasing steadily year after year. That is until recently, when a small but growing number of Canadian cities began reversing this trend, showing that with a focused effort, homelessness can be reduced.”

National Housing Day 2018 is our most hopeful yet. We remain cautiously optimistic that our leaders and communities are becoming part of the solution to the homelessness crisis.

However, Reaching Home removes the previous 65% Housing First investment target and puts the onus on communities to spend the money where they will achieve the greatest impact. Housing First is essential to preventing and reducing chronic homelessness.

To build momentum for Housing First across Canada, our Training and Technical Assistance program provides training to support the development of a highly skilled Housing First workforce. It’s mobilizing communities to take action by supporting them with training workshops and seminars to build high performing Housing First programs.

How do we know Housing First is effective? Just ask Finland—it’s the only European country to effectively reduce and nearly eradicate its homelessness crisis by prioritizing an aggressive Housing First approach. We speak to international Housing First expert Juha Kaakinen, CEO of Finland-based Y-Foundation, which is the country’s largest housing NGO.

This National Housing Day, let’s show the world that an end to homelessness is not only possible, it’s within reach.

By National Housing Day 2019, will Canada have a legislated right to housing?

On National Housing Day 2017, the federal government announced a national housing strategy with a commitment to “progressively implement the right of every Canadian to access adequate housing.”

Let’s let policy makers know just how many of us are watching to ensure legislation does not merely co-opt the language of the right to housing, but meaningfully puts it in action!

Join our call to legislate the right to housing by clicking here.