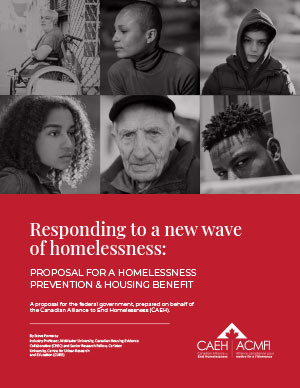 CALGARY – As Canada faces a massive wave of new homelessness driven by the pandemic and the ongoing cost-of-living crisis, the Canadian Alliance to End Homelessness (CAEH) is calling on the federal government to take urgent action to support low-income Canadians with a new proposal for a Homelessness Prevention and Housing Benefit (HPHB).

The proposed Homelessness Prevention and Housing Benefit would provide immediate rental relief to up to 385,000 households at imminent risk of homelessness, help over 50,000 people leave homelessness, and reduce pressure on Canada’s overwhelmed homeless systems while ultimately saving all levels of government money by reducing demand on public systems like health care. Most importantly, the proposed benefit will protect thousands of people from the life-threatening harm of homelessness.

“The loss of housing, economic cost and human toll of homelessness is on the same scale as Canada’s largest natural disasters – and now we’re seeing a wave of new homelessness sweep the country,” says Tim Richter, President and CEO of the Canadian Alliance to End Homelessness.

“Canadians are seeing increasing homelessness in their towns and cities across the country. This is a preventable disaster. A rapidly deployed, targeted housing benefit like the one we are proposing, can stop or at least slow this wave of new homelessness.”

More than 85 per cent of people experiencing homelessness and three-quarters of people in core-housing need simply cannot afford proper housing. While Canada must continue increase the supply of affordable housing, doing so would take years.

Using rent or income support is a rapid and effective way to prevent homelessness. In the United States, “the Biden-Harris administration’s response to COVID—including emergency rental assistance for people at risk of eviction and direct cash assistance for most Americans—prevented millions from losing their homes and kept evictions at pre-pandemic levels,” according to the United States Interagency Council on Homelessness. Data from the 2021 census also shows the Canada Emergency Response Benefit (CERB) lifted 200,000 households out of core housing need during the pandemic.

“This wave of new homelessness will continue and accelerate, unless something is done now,” says Don Iveson, Co-Chair of the CAEH and former Mayor of Edmonton. “As the former mayor of a major city, I know that if this wave of new homelessness is not slowed or stopped, the cost borne by municipalities and provincial governments will far outweigh the cost of preventing it now.”

“The federal government can stop this wave if they choose to. Canadians are deeply concerned about rising homelessness in their communities and the likelihood of family and friends losing their homes due to the rapid increase in the cost of living,” says Richter. “We know that rent supplements can rapidly house those already homeless and keep people in their homes. It is imperative we do something now.”

The whitepaper on the Homelessness Prevention and Housing Benefit can be found here.

CAEH is also launching an online action for supporters of the proposal to send a message to their MP, the Prime Minister, Minister of Housing and Minister of Finance asking them to include this benefit in the upcoming budget. Take action here.

PREV
Hope this holiday season – 2022 Year in Review
NEXT